Today let us gain some insight on Green Energy and how it benefits to choose this form of energy supply for our homes and businesses. Below we brief you on the top green energy tariffs in UK in order to help you choose the best Green Energy suppliers in UK.

What is Green Energy?

It is energy generated from natural sources like wind, sun, tides, plants, biomass, algae, geothermal heat etc. is termed as Green Energy. Simply said, it is the energy generated from renewable sources which are replenished naturally. In contrast, fossil fuels like coal, oil and natural gas are non renewable and finite so, generating energy from them would come to an end at a certain point. In addition, it creates pollution through smoke and other residues as well as creates an imbalance in the natural equilibrium. Hence, as a collective, we should minimize the use of fossil fuels to generate energy and rely more on green electricity and green gases.

There are six major types of renewable or green energy sources in UK. The scientists and energy experts are putting their best foot forward to generate maximum energy from these sources so as to replace the traditional energy sources. As these are replenished by nature in a short time period, they can reduce the carbon footprint and prove healthy for the environment.

This green energy source creates energy by using wind, which converts the kinetic energy into mechanical energy. The process uses onshore and offshore wind turbines that utilize wind and convert it into electricity. As the environment in Europe is favorable, generating wind energy is easy especially in the UK as 40% of the European wind blows over it. The contribution of onshore wind in total renewable energy generation equals to 25% while offshore wind gives the share of 18%.

This form of green energy harnesses the sun’s energy through solar panels made of photovoltaic cells to generate green electricity. The best part of solar technology is its efficiency and it does not throwback green house gases as a residue. Thus, it is totally environment friendly and one of the best ways to get cheap green energy. Solar energy contributes 18% of the share in the total renewable energy generation.

In this case, natural sources like plants, crops, animal matter etc. are used to generate the biomass, which can then be converted to methane gases, biodiesel fuels and ethanol. The green energy generated from combustion that is burning plant or animal matter is termed as Biofuels. They are created by growing plants that manufacture ethanol and biofuel oils. This is the highest source of generating renewable energy and contributes a share of 34% in total renewable energy generation.

The below chart explains the share of renewable sources in green energy development: 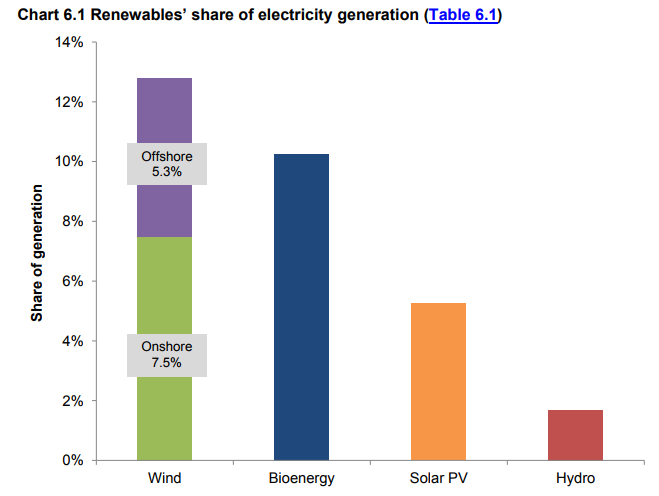 As per the latest reports by the UK government, the renewable share of electricity generation jumped from 25.4% in 2016 Q3 to 30% in 2017 Q3. The total energy generated through renewable sources was 22.3TWh in the third quarter of 2017.

Having gone through the details on the green energy sources in UK, let us now check the major Green energy suppliers in UK, who also adhere to the UK climate policy. They are also voluntarily audited by Ofgem under the Green Energy Certification Scheme.

These energy suppliers generate energy from renewable sources and thus contribute in reducing the carbon footprint of the UK. UK households and businesses can use this energy to reduce the impact of energy usage on the environment.

Ecotricity and its Green energy tariffs:

Considered as Britain’s greenest energy company, Ecotricity also opposes fracking and offers only green energy tariffs. Under its ethical pricing policy, the company chooses ‘one for all and all for one’ approach and offers only one green electricity tariff and one green gas tariff for each meter type including Standard, Economy7 and Pay As You Go. They have no exit fees or penalties and claims to keep its customers on their latest best price. It claims that you can save £350 in the first year by switching to its Fully Charged bundle. To know more about Ecotricity, Click Here!

Bulb and its Green energy tariffs:

This UK energy supplier offers 100% green electricity and 10% green gas to its UK households and businesses. The gas and electricity provider offers a single tariff for electricity and gas. Moreover, they do not charge exit fees and offers area specific green tariff. For more details about Bulb and its cheap green energy tariffs, Click Here!

Good Energy and its green tariffs:

The gas and electricity provider offers 100% renewable electricity and green gas to UK households and businesses. It generates energy from solar (27%), biogen (18%), wind (51%) and hydro (4%) sources.

To know further details about Good Energy, its cheap green energy deals and how it can help you reduce the carbon footprint, Click Here!

Green Star Energy and its tariffs:

The gas and electricity provider offers 100% renewable energy, which it derives from hydroelectric generators and wind power. The company’s simple home energy tariffs can help you save on energy bills.

For more details about Good Star Energy, its green energy tariffs and a quick comparison of green tariffs, Click Here!

Why you should choose Green energy suppliers?

There are many reasons to choose Green energy suppliers but the foremost is your desire to save the environment. By switching to green energy suppliers, you can help reduce the overall carbon footprint of the UK as well as reduce your own ecological footprint. It will help you live in a healthy surrounding and leave a better environment for the coming generations.

Green house gases formed as a residue of energy generation through fossil fuels are disrupting the climate. They are pushing many plant and animal species towards extinction and are a threat for sustaining human lives. By choosing renewable energy sources like solar, hydro and wind, you can reduce or stop the emission of harmful gases and thus, save the climate and planet as a whole.

Believe us, it is affordable!

You can choose suppliers that share your vision on energy conservation!

The below table give details about how green energy suppliers make a difference in the world. 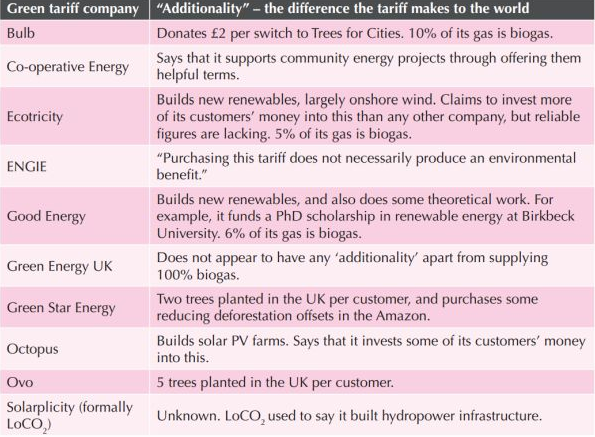 To prevent the destruction caused by generating energy from fossil fuels!

Companies deriving energy from fossil fuels through the process of fracking and mining cause a big harm to the environment. They cause a negative impact on the natural habitats of plants and animals as well as push many of them towards extinction. By choosing green energy suppliers, you reduce these vicious practices and help in creating a balance in the environment. Make sure that your energy bill payments are not used to create smoke in the environment.

How to compare Green energy suppliers in UK?

To conclude, FreePriceCompare can be your best help to compare Green Energy Suppliers UK and you can make a quick switch to green tariffs through our easy to use price comparison tool. As we compare all UK energy suppliers, we can suggest the cheapest green energy quotes online. We will manage your switch to cheaper green energy without charging a single penny. To know more about our services and to save money on your energy bills, feel free to visit us at https://freepricecompare.com/ or call our energy price comparison experts on 02039159088.