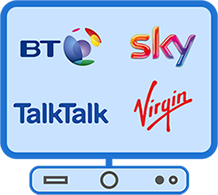 A significant number of us will have some sort of TV subscription such as Netflix or Now TV. Most of us will also have a separate subscription for broadband and phone services. There are, however, some potentially significant savings to be made by combining the two.

What are TV only broadband deals?

Combining your TV and broadband into a single package means that you pay a single monthly fee that covers both. It will usually be cheaper than having two separate contracts and using a single provider will also reduce administration for you.

Is a broadband and TV bundle right for me?

If you regularly watch a great deal of TV, movies or sport, combining your broadband and TV subscriptions can potentially save you hundreds of pounds over the course of a year.

Which TV services can be included in TV only broadband deals?

There are a number of popular options including Sky's satellite TV and Virgin Media's cable TV. Both of these services offer a wide range of channels. Additionally, there are now also several IPTV (Internet Protocol Television) options including BT TV and NOW TV, both of which are delivered through your broadband connection.

If you opt for a satellite TV or cable service, an engineer will have to come out to install and connect the equipment needed. However, if you choose an IPTV option, you might only need a set-top box or dongle.

Providers that offer these packages include Now Broadband, BT, TalkTalk, Sky, and Virgin Media. Here's a brief look at what each provider offers:

What are the best low-cost deals?

If you don't have much of a budget, you might be best served by looking at either TalkTalk or Plusnet. Both of these offer set-top boxes, with low-priced TV add-ons and a good selection of channels. The TV Passes from Now Broadband are also low cost.

What about phone lines?

All providers of broadband and TV packages will also provide a landline as standard; this is how they supply internet services to your home.

What should I look for when comparing TV only broadband deals?

There are a few key criteria that you should consider when deciding on what deal is best for you. These include:

So what are some of the best TV only broadband deals available?

This package has a setup fee of £29.95, is based on an 18month contract and has a monthly cost of £39. Sky Entertainment features over 300 channels, Sky's Superfast broadband offers an average speed of 59 Mbps (unlimited usage) and free weekend/evening calls.

This package is available on a 12month contract, has a £35 setup cost, and costs £33 per month. Its superfast broadband gives an average speed of 54 Mbps, there are over 120 TV channels to choose from as well as catchup services including BBC iPlayer, YouTube, and My5. It also comes with the Virgin TV V6 box that allows you to pause, rewind, and record your favourite programs. It also includes free weekend calls to UK landlines, Virgin Mobiles, and 0870 numbers.

This package is available on an 18month contract, has a setup fee of £25 and a monthly cost of £31.95. The broadband is unlimited with an average download speed of 38 Mbps and upload speed of 9 Mbps. There are over 100 TV channels including 54 entertainment channels and 2 movie channels.

This package is available on a 24month contract, has a setup cost of £49.99 and a monthly fee of £38.99 per month. The broadband speed averages 51 Mbps, there are 105 TV channels and calls are charged on a pay-as-you-go basis.

This package is available on a 12month contract, has zero setup costs and costs £23.99 per month. Anytime calls are included, the average broadband speed promised is 11 Mbps and the Sky Cinema attachment gives you access to 10 specialist channels.

This package is available on a 24month contract, has zero setup costs and the monthly fee is £31.95. The broadband is unlimited with an average download speed of 64 Mbps and upload speed of 20 Mbps. Telephone calls are charged on a pay-as-you go basis. The Apple TV subscription includes access to Amazon Prime Video, ITV, BBC, Channel 5, and StarzPlay, amongst others.