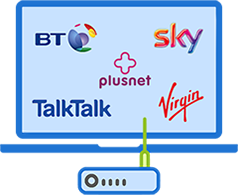 The home broadband market has become very crowded in the past few years, with the level of competition meaning good news for anyone searching for broadband package deals.

At FreePriceCompare.com, you can check out the broadband package deals offered by broadband suppliers in your area, helping you to make the correct choice for your needs.

Let's take a look at some of the questions you might have about broadband package deals, in order to help you decide on what is right for your home.

Why get a broadband and phone bundle?

Generally speaking, a broadband and landline phone bundle provides great value. If you need both services anyway, it would make sense to combine these with the one supplier, not least because they can often offer you a better deal than you might be able to get from separate suppliers.

A price discount is not the only incentive for people to sign up to broadband package deals. Many providers offer incentives, such as cashback offers, or even a free gift to help sweeten the deal. Even if there is no discount involved in signing up for the package deal, combining your phone and broadband supplier means that you have a single point of contact for both services, allowing you to manage your accounts or bills in one place.

Are other packages available?

Some firms, such as BT, Virgin and TalkTalk, also offer TV as part of their broadband package deals. It is usually the case that these services will be offered at a discounted rate in order to tempt subscribers. As with the landline and broadband packages, it is often easier to only have one company to deal with, making tasks such as package upgrades or moving home more straightforward with only one account to switch.

It is even possible to sign up for a package which includes a mobile phone deal, rolling your broadband, landline, home entertainment and mobile phone into a single monthly payment. There are a very limited number of suppliers who offer this service, and the deals may not necessarily be the best, especially when it comes to mobile phone packages. As ever, the best advice here is to shop around and find the deal that is best for your individual needs.

What sort of broadband deal do I need?

Broadly speaking, there are two types of broadband internet available. Standard broadband comes into your home through the copper phone lines and, as the name suggests, fibre optic broadband is carried through fibre optic cables.

Standard broadband is slower than its fibre optic counterpart but is usually cheaper. In addition to being faster, fibre optic broadband supports more devices running at the same time, so if you are likely to be watching Netflix, whilst someone else runs a tablet and a games console is being played in a different room, a standard broadband package is unlikely to be sufficient.

Unlimited broadband deals are best for homes that rely on streaming media for their entertainment needs, as streaming can involve a great deal of data. BBC iPlayer can use up to 1GB of data per hour when streaming HD content, so any capped broadband package could see you running out of available data pretty quickly if services such as iPlayer are used regularly.

Most suppliers offer unlimited broadband deals, as well as the choice between fibre and standard broadband.

Some areas are still not connected to the fibreoptic broadband network, meaning that they don't have a choice over their broadband type. You can discover the options available at your address here on our site.

There are a wide range of options available through telecoms companies when it comes to landlines. These range from entry-level packages to those with anytime and international calls included.

The basic packages from landline providers include no call time, in other words, you pay for each phone call you make separately. The phone line is an integral part of a broadband package, as this is how the data is brought into your home, but as many people no longer use their landline, this may prove to be the perfect package for them.

To tempt people into using their landline phones again, many providers offer packages which include any calls made during the evening, weekend or both. Some providers such as The Post Office offer weekend calls as standard, but these are available from the majority of suppliers. If you regularly make landline calls during the weekend or evening, it may be advantageous to opt for one of these bundles.

If you are likely to be using your landline phone during the day, an anytime package is likely to be the most useful option. These packages include all calls made to numbers within the UK, except for premium and non-geographic numbers.

International calling packages are ideal for anyone with relatives abroad, especially those in places where it is hard to get a stable enough internet connection to allow for video calling. Packages vary, as do prices for these, so be sure to check the deal covers the areas you need to call.

The range of television packages available from broadband suppliers is wide, ranging from a basic Freeview service to one including premium sports and movies channels.

As you would expect, the range of prices associated with these packages is equally wide, with basic Freeview only packages often being bundled free with a broadband package, whilst premium content may cost almost as much as the rest of your package in some cases. Some providers such as BT offer free sports channels to tempt new subscribers, and other firms such as NOW TV work on a rolling subscription model, so that customers don't need to commit to a year-long contract for content.

The marketplace for broadband package deals is complex and very busy, with each different broadband supplier creating its own offer, which will vary slightly from its competitors. Ensure you that get the best deal for your own needs by weighing up all of the options available, and making a decision based on the elements that matter to you. This may range from overall price, speed of broadband, landline options, number of devices supported or TV options available, or any combination of the above.